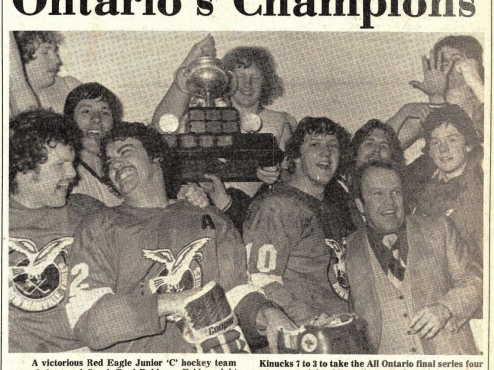 Tony and Jan Visca are happy to announce that the Clarington Eagles Junior Hockey Team has been transferred to Kirk Kemp who intends to transform it into a community-based volunteer driven club. Kirk is a fourth generation Bowmanville native and Eagles alumni from the Ontario Championship team of 1978-79. He and his son, Eric who played for the Eagles from 2002 to 2006, were the first father-son combo in Eagles history.

The Visca’s would like to thank the community for their support over the last decade while the Eagles transitioned back into Junior “C” hockey. It was a privilege to meet and work with so many outstanding local volunteers, staff and players. We are confident that the Eagles are entering a new decade with fresh enthusiasm for a local tradition and community icon.

Kirk looks forward to building a great core of volunteers to carry on the wonderful tradition of the Eagles into it’s sixth decade of local, high-quality competitive hockey. The Eagles look forward to seeing you soon at Rickard Complex … Thursday nights in the #eaglesnest!

Road Closure: Thoroughbred Street will be closed to through traffic

Road Closure: Thoroughbred Street will be closed to through traffic